My ghost writer Matthew Sharpe and I were locked in a conference room at the Grand Hyatt New York City a couple weeks ago spending hours and hours talking about the topic of my next book — Influence.

“What’s the definition of influence?”, Matthew kept asking me. 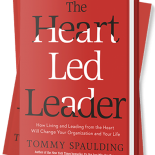 Book writing 101: an author must define the word or topic they are writing about. In my first book, It’s Not Just Who You Know, I defined the power of building authentic and lasting relationships – both personally and professionally. In my second book, The Heart-Led Leader, I defined the most important leadership philosophy one must have, “to lead with love…with a servant’s heart…and the power of building organizations (and individuals) when you lead with putting others before yourself.”

Now back to Matthew’s question, “What is influence?” After eight hours of talking about that one word, I was not happy with any of the definitions we came up with and it is was time for me to catch my flight back to Denver. Half frustrated, I said to Matthew, “over the next couple weeks, I’d like us both to do an exercise. I’d like us to write down on a piece of paper the names of three people (other than our spouses and relatives) that had the most profound and positive influence on our lives.” And I continued, “then I want us to do the same with three people that had the most negative influence on our lives. I think this exercise will help us define the kind of positive influence we want to have on the lives of others, and the kind of negative influence we want to avoid.”

I’m not always the smartest cookie in the cookie jar, but boy, was I right! A picture IS worth a thousand words.

The three most positive influences in my life are:

Three most negative influences in my life are:

Doing this exercise and seeing the names of six individuals helped me define the lasting and positive influence I want to have (and not have) on the lives of others.

If I had a dollar for every meal that I’ve shared over the last 20 years, phone calls, uplifting conversations, fishing trips, golf outings, ballgames and sips of bourbon with my mentor Jerry Middel, I would be a millionaire. Nobody in my entire life has invested more time in me than Jerry Middle. Yes, he has donated significantly to my non-profit youth program the National Leadership Academy. Yes, he co-signed the bank mortgage loan to buy Jill’s and my home. Yes, he got me back on track with my faith in God. Jerry did do all these amazing things for me over the last two decades. But what he really gave me that had the greatest influence on my life was his gift of time.

The world knows Frank DeAngelis as the principal of Columbine High School — the location of America’s first mass school shooting. But I know Frank as my dear friend. And I say the word dear because that is the gift that Frank has given me. He has told me he loves me dearly thousands of times. For the last six years, Frank is the first person to send me a text message every morning with an inspirational quote or a bible verse, and he always ends by saying, “I love you dearly.” Yes, Frank is the honorary chairman of our National Leadership Academy. Yes, Frank has helped me professionally (and personally) a hundred times. But, Frank’s legacy in my heart is that he taught me the power of loving someone dearly.

As for the three people that had a negative influence in my life, I now see them as a gift. A gift of teaching me how I don’t want to live, love and lead. I was leading a Heart-Led Leader Woman’s Retreat in San Francisco last week with my dear friend Liz Wiseman, author of the amazing book Multipliers. Liz said something in her remarks that, for the first time, gave me empathy for the people in my life that have hurt me. “I don’t see people as hurtful. I see them as hurt.”

Do you want to be a good boss? A successful leader? A powerful parent? A loyal friend? It all starts and ends with influence. And the kind of influence — positive or negative — we leave in our leadership wake is our choice. I know I want to have the kind of influence on the lives of others the same way Mrs. Singer, Jerry and Frank had on me.

Do you want to lead a life of influence? Then take out of a piece of paper and write down three people in your life that have had the most positive and negative influence on you. There is your road map. There’s your influence compass. Six names will become your north, south, east and west. And it doesn’t take the smartest cookie in the jar to do this exercise, but it will change the way you see influence. And certainly, it will change the way you live it.